Other appearances - proof the search is not in vain


For those who still think we're looking for our saviour in the wrong place, we present here some of the evidence we've collected of divine visitations that visit blessings upon the seemingly mundane in our world. While none of the items featured here in which holy figures have appeared have the rich heritage of the pizza, we are sure you will agree that they serve as an inspiration to us all.

The apperances are many, and this page would be filled to overflowing if we were to chronicle these back to the Shroud of Turin and beyond. Even in modern times, accounts of appearances in garage doors, chimneys, and clouds are numerous, to say the least. We confine ourselves, then, to the images that we can actually show you via the same electronic medium that can, through our project, bring the one true Jesus pizza to us all. In the spirit of the project, please send us email at .+sightings@asdSPAMBLOCKf.org (removing the obvious first but not removing the plus sign or dot) if you find something else that is worthy of inclusion on this page. 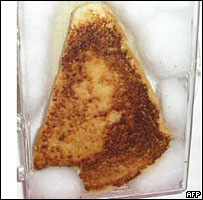 We begin where Jesus began, with the Blessed Virgin Mary. Over a decade ago, a Florida woman was blessed with a grilled cheese sandwich bearing the Mother of God's holy image. Diane Duyser says she nearly took a bite out of Mary before noticing the holy image. Unfortunately, but not atypically in light of the history of holy relics, she decided to offer to Caesar what is God's, deciding to sell the toasted artefact for $28,000 on eBay.

Similarly, Canada's Fred Whan decided to part with his holy relic in late 2004, when he shared with the world the glorious news of Christ's appearance on a fish finger / fish stick. Of the discovery, he said he was about to discard some burnt fish sticks when he turned one over and noticed the human face: "I said, 'That looks like a rock singer,' and then my son goes, "It looks like Jesus,' and I said, 'Well, it does, yeah.'" In a modern echo of more traditional immaculate preservation, human faith and modern technology were blended in the freezing of the fishy item a year ago. This is fitting, given that fish sticks are a similar meeting place - of the modern and the work of Jesus as a fisherman 2000 years ago.

Appearances of Jesus in bread, in a form other than the Eucharist, date back at least as far as 1978, when Maria Rubio noticed the face of Christ on a tortilla she was making. About 8,000 pilgrims made their way to her home in New Mexico to view the sacred foodstuff. Rubio was reported as leaving her house unlocked in order to allow visitors to enter and view, and meditate upon, the tortilla.

We would be remiss in our duty of fairness if we were to claim that bread items were the only foodstuffs that have been chosen to be seats of Christ's presence. Karin Winkler of California has issued a press release in which she described finding 'a perfectly shaped holy cross' in a staple food. On her Web site, this 'personal chef' explained that she would sell the holy tuber online in December 2005. She described the potato, which she said she gave to her son, who in turn asked her to sell it on eBay, as 'absolutely unaltered (except peeled und cut) and in it's natural condition!'. Its disposition after Advent 2005 is unknown. 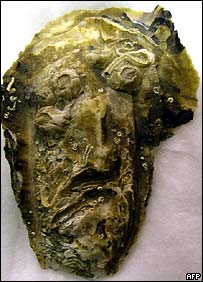 In an arguably more exotic find, Matteo Brandi, an Italian bar manager in Switzerland, found Christ in an oyster shell and told the news media about this in late 2004. The oyster was eaten, but the shell stuck to his hand, he said, as if Christ were calling to him. A devout Catholic, Brandi kept the shell in a sacred position atop the bar's hi-fi unit, and two years later he decided to give it to a bank for safekeeping prior to trying to sell it.

In a kitchen-related Jesus sighting from February 2005, Juan Pastrano of Prairie Lee, Texas, explains that he noticed an image of Christ in his frying pan when he was making breakfast for his mother. It is still unclear whether Pastrano plans to sell the frying pan or continue cooking with Jesus. Perhaps this is the sort of frying pan needed for the best unleavened flatbread.

Many appearances of the divine - far too many to recount here - are food- and kitchen-based today. For equal time, we should mention that there are still appearances in the more traditional abode of the supernatural, buildings devoted to this purpose. We present one sample here, but there must be others.

In June 2002, the Rev. Thomas Masters, pastor of a Baptist church in Florida, announced to the world his finding of Jesus in a door. This is not the first time Christ has visited him through everyday objects in this manner: eight years ago, he found Jesus in the bathroom window, which even moved under his hand.
Having been a carpenter, Jesus apparently likes to appear in wood. A door in Wareham, Massachusetts, was similarly visited by his image. Pictured here is this door. Working in Good Shepherd Church three years ago, George Funnell heard a woman who was staining the closet doors cry out an apology for finding the wood grain ugly. Funnell said he went into the room and saw the image, which had been enhanced by the wood stain. The door is now displayed on one of the walls of the church.

Finally - for now, anyway, in what surely must be a foreshadowing of an ecumenical pizza future, Jesus appeared on a chapati in Bangalore, India. Pilgrims made their way to the loaf of unleavened bread, baked by Shella Anthony, who we can only assume had not heard of the Jesuspizza project so took the somewhat burnt chapati to a local church. The chapati, which was mounted in a glass case at the Renewal Retreat Centre, had been visited by at least 20,000 people at last report (in late 2002), according to church officials. The Centre's Father Jacob George said even Hindus are among those "feeling blessed on witnessing it".

Go back to our home.